It has been confirmed that there have been at least five tornadoes that ripped through the Deep South on Sunday night into Monday, due to a large cell of severe weather. At least one of these storms caused extensive damage to many building structures in the Florida Panhandle, including a local prison in the area of Blountstown.

The whole production of this storm was due to a warm and powerful jet stream, humid air, low-level wind shear, and a cold front. All of these factors combined caused a supercell, and spun up a few tornadoes in the Deep South. November is actually known for producing tornadoes in the southern states.

There was one confirmation of a tornado touchdown near Blountstown, which left a plethora of structural damage behind. The storms then began to move eastward as the day passed, with cold air filling in behind the passing line. This severe weather comes on a day when the Ohio Valley pauses to mark the passing of one year since the tornado outbreak that produced several deadly tornadoes on a quiet Sunday afternoon.

The National Weather Service performed a damage survey and came to the conclusion that it was an EF2, and a second tornado was then produced in Liberty and Gadsden counties, and that tornado was rated an EF1.

It has been reported that two people were injured slightly during this event, according to the Associated Press. A sheriff with Calhoun County told the Associated Press that workers were arriving for their shifts at 4 a.m on Monday morning when the tornado caused extensive damage to about 30 vehicles in the prison parking lot. The sheriff also stated that nobody escaped from the facility, which holds about 1,354 inmates.

As Monday pressed on, the line of severe storms moved eastward some and drenched the town of Jacksonville with heavy torrential rains. This storm was also accompanied by damaging winds, which downed some trees and damaged a gas station near Fort Caroline pretty badly.

The recorded winds that came with this supercell were as high as 67 mph in the Jacksonville area as the storms continued to roll through. The winds shook the Dames Point Bridge in Jacksonville during the event, but there has been no word on whether or not the drivers were injured, but all of the lanes of the bridge were reopened less than two hours after the incident.

According to the Associated Press on the same report, the storm also damaged a Wells Fargo building that is located in downtown Jacksonville, and ripped the roof off of a Jacksonville Beach building. The high winds almost blew a broken window pane off of the Wells Fargo building, prompting police to shut down any of the nearby streets in fear that the window may fall and injure someone. 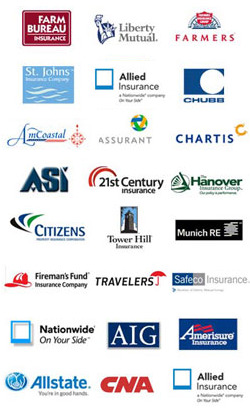